Life is an incredibly complex interdependence of matter and energy among millions of species beyond (and within) our own skin. These Earth aliens are our relatives, our ancestors, part of us. They cycle our matter and bring us water and food. Without “the other” we do not survive”. – Lynn Margulis; Symbiotic Planet

With no evidence that humans can persist outside of our host biosphere, why so much naïve optimism around colonizing space? It seems an emerging mania is gripping celebrated entrepreneurs who are falling over themselves to prove that they are space-worthy. As a global chorus harmonizes over the disparities between rich and poor, how is it that the highest profile high-net-worthers are warbling otherworldly expectations? Is this a sign of pioneering spirit or is it ego-driven indulgence? Worse still, is it a diversion calculated to distract us from more pressing issues (like, say, rising income disparity)? Better to be perceived as a saviour to human prospects than simply the best accumulator of wealth.

Demonstrating an alarming naivete in the broader science spectrum, even the late, great physicist and deep thinker, Stephen Hawking’s parting counsel was to bolt for the stars. Sadly, this was an emphatic illustration of the dangers of academic specialization and siloed thinking.

As Lynn Margulis so astutely notes in Symbiotic Planet, we, the beleaguered citizens of earth, are intertwined with our host biosphere and its visible and invisible organisms. We thrive only via sustained interconnectedness. Like mobile forests, each one of us is a self-contained ecosystem with deep integrations to other living beings. Billions of years of co-evolutionary collaboration mean that we can no sooner part company with Earth than we can with our brains. 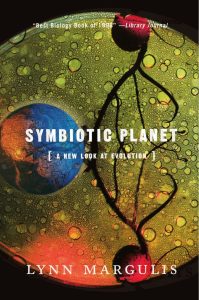 Humans, if someday they trek in giant spaceships to other planets, will not be alone. In space as on Earth, the elements of life, carbon, oxygen, hydrogen, nitrogen, sulfur, and phosphorus and a few others, must recycle. This recycling is no suburban luxury; it is a principle of life from which no technology can deliver us. Human voyages into deep space require ecosystems composed of many nonhuman organisms to recycle waste into food. Only very short stints in constant contact with Mother Earth are possible in the absence of ‘ecosystem services.’ – Lynn Margulis; Symbiotic Planet

Consider that each one of us is home to a hundred trillion bacteria. Our livers replace themselves every 1.5 years and even our skeleton is replaced every 10 years. Consider also that it is coming up on 30 years since the last real experiment to see if we could persist in a closed ecosystem isolated from the world, and it was an informative failure. Biosphere 2 failed in large part because of something as simple as our lack of understanding of soil microbiology. We could not even build a functioning enclosed ecosystem on our own planet to sustain seven people.

Our intestines alone contain a complex ecosystem of over 400 bacterial species. Interdependencies between us and the microflora in our own gut are sufficiently mysterious that even the best trained gastroenterologists can struggle to diagnose and treat digestive maladies. On Earth. With a full spectrum of microbes and bacterial sources at hand.

To “green” Mars, to colonize other planets, or to live for extended periods in space will, of course, require far more than just human settlers and machines. It will require organized, efficient communities. Living together will be as crucial to the colonization of outer space as symbiosis and diversity were to the Paleozoic Era colonization of dry land. Life in space, if it is to occur, will require physical alliances, including new symbioses, among differing life-forms. – Lynn Margulis; Symbiotic Planet

Spaceship Earth has it all

Technological hubris is omitting a crucial part from these space dreams: the realities of evolutionary biology and our reliance on a spectrum of co-evolved species that allow us to survive on Earth. Also absent is recognition of the extended time frames required for adaptation to new environments, and that along the way, the losers don’t make it. So, forget to pack a few replacement microbes for the trip and there will be more than radiation and the cold vacuum of space to be worried about. Billions in the bank back home won’t help either.

It is safe to conclude that humanity’s best long-term prospects are here on Spaceship Earth and not in artificial environments far from it. Our challenge then is not to escape our home planet, but to find a way for 8 billion of us to thrive here indefinitely. One important step in that process is to appreciate the evolutionary and biological foundations of our existence and the extent to which we are all interdependent with microorganisms to live. Lynn Margulis’ fascinating 1998 book, Symbiotic Planet, is a good place to start, providing a grounded counterpoint to the unmoored aspirations of billionaires.

Just one example of half-baked arguments for space colonization

Centre for the Understanding of Sustainable Prosperity